Where you are：Home > PRESS CENTER > The News

Dec. 18, 2018 is a sunny day, and on this day we invited leaders of Guangming District, suppliers, guests and friends, as well as TK former employees and all TK people to celebrate the 35th anniversary of TK Group together and share the TK’s fruitful results in the past 35 years. TK was specially decorated, festive and dazzling, and happy smiles can be seen on every TK people’s face. The most eye-catching part is a long CRH signature wall. Each carriage represents a year, and employees signed their names seriously on the carriage according to the year of entry into TK. These signatures denote signatories’ affection for TK, which pushes TK forward. 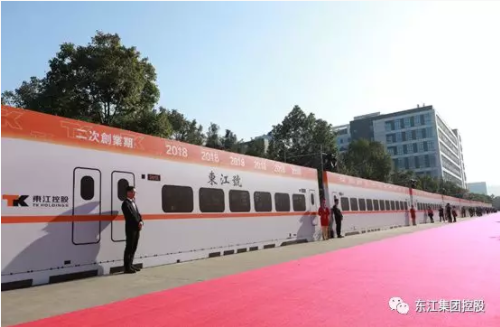 The 35th Anniversary Celebration of TK Group started with the return of the former employees. At 13:30, the former employees of TK came one after another. They were so excited to see their former colleagues, and talked much at the company of existing employees. When visiting the TK Science and Technology Park, all the former employees exclaimed at the growth and changes of TK and expressed their most sincere blessings to the future of TK. At the meeting, Chairman Li Peiliang gave a warm welcome to the former employees who came from afar, and expressed that in the case of tough economic situation in 2018, TK’s profit in the first half of the year increased by 27.1% compared with the same period of last year, which was attributable to every TK people, including all former employees present, and finally wished to build a 100-year TK together with everyone! CEO Weng Jianxiang also extended a warm welcome, and encouraged everyone to talk freely about “the difference between TK and other companies”. The former employees discussed actively and offered advice for the future development of TK. Director Li Liangyao also sent the warmest greetings to the former employees.

After the exchange meeting, senior leaders and former TK people wore red scarves and took photos before the group photo wall to record this good moment. TK also invited the returned former employees to Quanfulou to dine and participate in the 35th anniversary party.

At 17:00, the cocktail party started. Guests were immersed in the melodious music, delicious food, mellow cocktails and well-arranged venues… The “Craftsmanship Promises an Intelligent Future” themed banquet was coming in time. Suppliers all appreciated the warmth and hospitality of TK. At 18:00, all guests entered the banquet hall under the guidance of the host, and the TK Group’s 35th Anniversary Party officially started. At the party, Li Peiliang, Chairman of TK, expressed warm welcome to all guests, and special thanks to all sectors of the community, general customers and suppliers for their support and care. TK will always adhere to the concept of “common development and common improvement” and move forward with everyone. Afterwards, Chairman Li Peiliang, CEO Weng Jianxiang and Executive Director Li Liangyao proposed a toast. At this time, the band played sweet music on the lawn, and chefs’ carefully-cooked creative dishes and desserts for the 35th anniversary were offered, bringing guests a double shock of hearing and taste. After the dinner, all guests were led by Miss Etiquette to the Avenue of Stars where lights shone upon each other. In the laughter everyone walked to the main venue of the 35th Anniversary Party.

Everyone was cheering at the main venue of the 35th Anniversary Party which was broadcast live in both Germany and Suzhou. Before the opening of the party, several big balloons with the TK concept were rolled in the crowd, symbolizing the employees’ recognition of TK culture and the TK culture had been deep rooted in the minds of employees. The “Craftsmanship Promises an Intelligent Future” themed 35th Anniversary Party was kicked off by a fabulous sand painting performance. This performance retold the development of TK Group in the past 35 years. 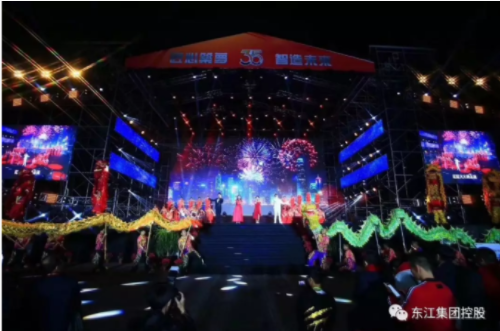 The opening dance “Heydays of TK” caught the eyes of everyone. The lion and dragon dance pushed the party to a climax. Afterwards, Chairman Li Peiliang, CEO Weng Jianxiang and Director Li Liangyao made speeches in turn. After 35 years of ups and downs, TK Group has gone international with remarkable achievements. TK’s every decision and behavior in the past 35 years are made based on the fairness and mutual benefit among employees, customers, governments, natural environments and suppliers. We always defend our principles of fairness, justice and openness through honesty, to secure a healthy relationship between them. We will put all energy to do one thing - improving production efficiency and thus creating higher value for society.

In the future, TK will embark on a new journey to make its business more professional, more refined, more stable, stronger and bigger. We will spare no effort to turn TK into a century-old enterprise and pay back to society with better performance. Once again, we sent the most sincere wishes and greetings to all the guests, TK people and their families! 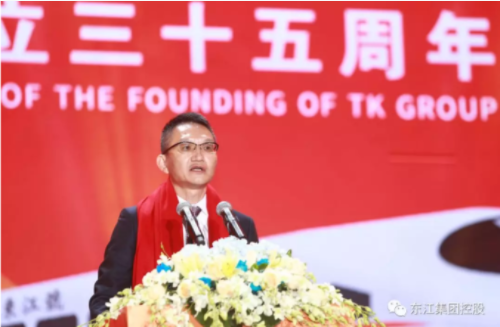 From manual machinery, CNC machine tools to CAD/CAM integration, and from automated production to industry 4.0 flexible production, TK is progressing towards intelligent operation in the technical field. Technology is the cornerstone of TK's development, and we always strive to maintain our absolute advantage in mould technology. In 2018, TK put into operation 3 flexible production lines. TK will continue to invest in the development of Industry 4.0, hoping to create more value for customers and drive the development of the industry.

In terms of business, we formerly customized molds according to requirements and customers were mainly Hong Kong manufacturers; Now we have developed into a Fortune 500 company providing one-stop injection molding solutions and serving all industries in the world. Diverse customers have brought TK's products into all industries, especially in the high-tech industry in Silicon Valley, USA and we have won a good reputation. We have become the most trustworthy long-term partner of many international famous brands and high-tech customers.

Since the listing in 2013, TK has accelerated its capital investment and made several strategic acquisitions, all of which were quite successful. In addition to improvement of operational efficiency and business expansion, TK will continue to acquire or invest in projects that are complementary and synergistic with the Group, quicken the development of new markets and new customers, and further expand the Group's production capacity, regional coverage and sales channels to drive the overall business growth. Today’s TK relies on the support of all walks of life and TK people’s fulfillment of TK culture, pragmatic spirit, diligent work and concerted effort. Looking back, I want to say thanks most. Thank every TK people for their contributions to the company over the past 35 years. Thanks for your hard work!

Subsequently, a grand award ceremony was held for the long-term employees and the top ten employees. The whole party consisted of various programs: poetry reading “Love for TK” - expressing the deepest blessings to customers, suppliers and employees; song “YOU RAISE ME UP” - evoking the enthusiasm deep in employees’ hearts; acrobatics “Spacewalk” - showing the beauty of the strength; and skit “Alarm Bell Rings” . Songs sung by the top management pushed the party to the climax. “Storms Rainbow Sonorous Rose (rainbow in drizzles, unyielding roses)” revealed the fortitude of TK’s female employees; “Beyond the Dream” showed the ambition of TK’s male employees; 3 founders with red scarves were slowly risen from the center of the stage, singing “Chinese”. They were the helmsmen leading us to overcome all obstacles. “Song of TK” led everyone toward the company’s ultimate goal. “Making human life more attractive” composed of employees’ smiles left a deep impression. These wonderful programs gained much cheer and applause from audience... At the end of the party was the lucky draw, and 6 employees from the production department became the lucky ones! The 35th Anniversary Celebration of TK Group was a great success with the joint efforts of the entire project team and all TK people to promote the craftsmanship and teamwork spirit! TK strives for perfection and common development with craftsmanship; TK aims for intelligent future with innovation. The past 35 years are woven by TK people’s efforts and sweats; the past 35 years record TK people’s struggle and pride. The 35th anniversary erects a milestone in TK’s development. Let us develop and improve together with TK, and strive to build it into a century-old enterprise!